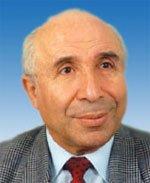 Babken Harutyunyan was born in 1941 in Yerevan. In 1958, after graduating with a gold medal from No. 72 Secondary School named after Hrachya Ajaryan, he was enrolled in the Faculty of History at the Yerevan State University, from where he graduated with honors in 1962. From 1963–1966, he was a doctoral student at the same university. In 1968, he defended his doctoral thesis titled “Vayots Dzor from ancient times to 1045.” Alongside his work as a scientist and a lecturer, Harutyunyan studied (1972–1977) and graduated with honors from the distance learning program of the Yerevan State University’s Faculty of Law. In 1993, he defended his doctoral thesis titled “The System of Political and Administrative Division of Great Hayk, According to ‘Askharatsoyts’ (Western and Southern Worlds).” In 2005, Harutyunyan received the title of professor, and in 2006 he was elected a corresponding member of the RA National Academy of Sciences. From 1969 until his death, he lectured at the Yerevan State University. In 1993–1994, he also lectured at the Hamazkayin Higher Institute of Armenian Studies in Beirut, and in 1995–1996 at the University of Michigan-Dearborn (USA). In 1970–1971, he was the Dean of the International Students Program at the Yerevan State University. From 1983 to 1985, he was Deputy Secretary of the Party Committee at the same university. From 1985 to 1988, he served as the Director of Yerevan University Press. From 1993 to 2004, Harutyunyan served as the Dean of the Yerevan State University’s Faculty of History, and from 1997 to 2004, he was Head of the Department of the History of Countries Neighboring Armenia. In 2003, he was elected as the Head of the Department of Armenian History at Yerevan State University, a position he held until 2007. In 2007–2008, he also served as Academic Secretary of the RA National Academy of Sciences. Harutyunyan was awarded the Gold Medal of the Yerevan State University, the medal of Nobel Prize Winner Albert Schweitzer, as well as the Russian Order of “Catherine the Great” and German Order of “Gold Eagle with Gold Crown.” In 2006, he received the Movses Khorenatsi Medal, and in 2009 the title of “Honored Scientist of the Republic of Armenia.”